I planned a post today about All Soul’s Day, a day we celebrate the lives of those we’ve loved who have passed away. Living here in the Southwest, Dia de Los Muertos is big, with festive parades and sugar skull decorations everywhere. Dia de los Muertos, or Day of the Day, is a Mexican holiday celebrated on November 1st and 2nd, honoring the deceased with food, ofrendas, and calavera make-up.

It also happens to coincide tonight with Game 7 of the World Series, a tied series between the Cleveland Indians, and the underdog favorites, the Chicago Cubs.  Being from Detroit, my team is the Tigers, but I’m a sucker for the underdog, so I’ve been rooting for the Cubs. But tonight of all nights, we had no TV reception.  Though we live in the Southwest, we live in high desert, which means that November has brought cooler temperatures, and the winds were whipping over the mountain, shaking our tiny little antenna beyond its capacity. Like my dad always taught me though, “This is history!” We had to witness this, and so I dragged my husband out to the local pub to watch the game, despite a long day after soccer practice for our little guy.

As I’ve posted before, I’m not an athlete.We don’t watch a lot of sports except when my kids are playing or the Olympics are on.  My son has been playing soccer for 7 years, and I still don’t get what off sides (not even sure this is one word or two) means when the ref calls it.  But I grew up watching baseball, and the 1984 World Series Champions were my Tigers.  I can still remember the faces of the players from Sweet Lou Whitaker to Gibby, and my personal favorites, Alan Trammell and for some reason Darrell Evans. Hot Sunday afternoons we sprawled out in front of the TV, fan rotating over all of us ineffectually, or my aunt would pull the antenna up on her stereo to catch the broadcast on WJR by Ernie Harwell. 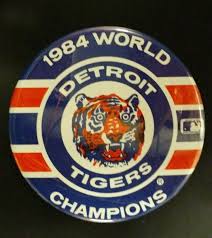 Tonight, I wanted a little of that baseball magic back.  Watching those games made time stand still, and the game tonight did not disappoint.  I don’t know these faces like I knew my Tigers, but I recognized the same intensity in them.  That drive to win, to play at the top of your game, the agony of a strike when the count is down 3 balls, 2 strikes, and it’s the bottom of the inning, it’s still there.  We sat in the pub with complete strangers, our eyes rooted to each swing of the bat, each bounce of the ball across a rainy field, and all of our cheers and groans somehow united us.  One couple, Marshall and Jennifer, happened to be from Illinois, with long generations of die-hard Cubs fans who never had seen the Cubs get this far in the World Series.  Marshall’s grandfather died two years ago at age 88, having never had his lifelong wish to see the Cubs win the World Series fulfilled.  His wife Jennifer rubbed the back of his Cubs shirt as the score tied at 6-6, and we headed into a 10th inning with a rain delay.

I looked around the pub, at the bartenders who were kind enough to stay open past closing time, at the customers wandering in and out to stand, arms folded in front of the television, at the waitstaff expertly whisking away glasses and plates, and thought of all the other baseball fans across the world, sitting like we were, on the edge of our seats, praying and watching, jumping up with every hit, cheering every catch, holding our breaths collectively.  This, then, is what draws people to sports, though we are not all athletes.  This drama, this heightened awareness of each passing second, it makes us feel alive, makes us feel as connected as if we are all related to the players, like me on the sidelines cheering for my little guy kicking that soccer ball towards the goal.

And when the Cubs did win it, hard-fought as we watched with fingers clenched, palms sweating, Marshall raised a glass in honor of his grandfather, as fans all across the world did, for those who have passed, and didn’t get to be here celebrating with us.  We honor our dead by remembering them, by cherishing their memories, by our longing to share moments such as this with them. After the game, we lingered in the pub, savoring the atmosphere charged with the joyous aftermath of victory, then walked out into the darkness, a blessing of rain echoing that on the baseball field, a strangely fitting end to Dia de los Muertos.