Oh, little man, you know how to break your mama’s heart into tiny little pieces. And just like that, I knew we wouldn’t be going to Colorado for Thanksgiving.

“You sure were, buddy. Let’s hope you don’t need to be brave tonight.” But, unfortunately, he was up vomiting twice again through the night, after the phone call that had me hurrying back to his dojo, where he managed to vomit 4 times in the 15 minutes it took me to get there.  He made it through the rest of the night, humor intact, “I am kinda greenish, like the Hulk!” with only a bit of drama.  “You don’t know what I’m going through here, Mama,” he sighed, as he rested his flushed cheeks on my chest.

Since Saturday, I’ve been building up to the realization that we likely won’t be spending Thanksgiving with my aunt, uncle and cousins in Colorado Springs.  One of the delights of moving out this way was getting to know better my father’s youngest sister, my uncle and the cousins who had come once for a visit many, many years ago when we were kids. Now we’re all grown with kids and careers of our own, and getting to know and love them anew as adults has been such a gift.

My aunt is an amazing athlete (skills which obviously skipped me), golfing like a professional, and regaling us with stories of running the Pikes Peak marathon when she was older than I am now.  She used to traverse Pikes Peak regularly, and my favorite story to tell about her is the time she met some college kids just knackered out on the ride down from the top of the peak on the Cog Railway, defeated by the mountain.  “The trick is not to stop,” she advised them. “Ask me how old I am. I used to climb Pikes Peak once a week.”  She is a tiny little fashionista, always perfectly coiffed and dressed, and has more style in her little finger than my whole body.

My uncle has a deep, rumbling chuckle that makes me smile every time I hear it. He’s a night owl like me, and I love to hear his stories from when he was in the military, which is how he met my aunt. I think my husband looks forward to hanging out with him as much as I do, so when he woke up on Saturday feeling like he’d been hit by a bus, hacking and congested, and said that he wasn’t sure about driving up to Colorado Springs especially with a storm brewing, I knew he wasn’t joking, and that our plans for Thanksgiving were in jeopardy.

I know that Christmas is usually everyone’s favorite holiday, but for me, it’s Thanksgiving.  My sister laughs because she knows how much I love to eat–“So, of course, it’s your favorite!” I love that the focus is on being grateful, the food and family.  Every Thanksgiving I look forward to being with everyone around a huge table groaning under the weight of a giant turkey, a ham studded with cloves and pineapples, lumpy mashed potatoes, squash with no weird marshmallow topping, kim chi, sausage stuffing, salad with interesting bits like corn and mango thrown in a la little sister, and corn bread. Every Thanksgiving, my mother would try a new dish, and if it went over well might get added to the rotation. I’d wake up every Thanksgiving, and the house would already be filled with the smell of roasting turkey and red seasoned pork loin (because we’re Asian, duh).  The bread prepared for days prior to Thanksgiving would be ready to be tossed with shitake mushrooms, sausage, shredded carrots, celery and sage to make the stuffing, my favorite Thanksgiving dish. Given my mother’s aversion to baking pies, desserts would be brought by family, and we couldn’t wait for my aunt’s famous homemade pistachio pudding pie to arrive.

As we got older and could participate more in the decision-making, we’ve tried various forms of turkeys–in the roasting pan, in the oven, in a deep fryer, injected with mango infusions, covered in butter, in a bag, thoroughly covered in various rubs, stuffed with apples, celery, cranberries, carrots, onions and garlic. Regardless of how the turkey tasted that year, the outcome was always the same: family gathered, thanks given for another year together, and delicious leftovers for days.

My little guy’s stomach bug was the topper to the decision not to leave today as planned.  He is better today, keeping food down, but the big guy is still contagious, and I would not bring sickness to my aunt’s house.  To top it all off, a huge winter storm is making its way toward Colorado, making it impossible to make it there and back in time for my sick firefighter to make it in to work on Black Friday. This isn’t my first Thanksgiving away from home and the rest of the family, but it doesn’t make it any easier. To distract myself from missing everyone, I follow my mother’s example and challenge myself to make a new dish. The first Thanksgiving it was a roast duck. Tomorrow I’ll be trying my hand at a pecan pie cobbler, and I’ll be preparing the bread, turkey legs and pork loin, inviting all the friends who are part of my family here, and doing the best we can to make it Thanksgiving wherever we are, though my heart is in Colorado Springs and a small town outside of Detroit. 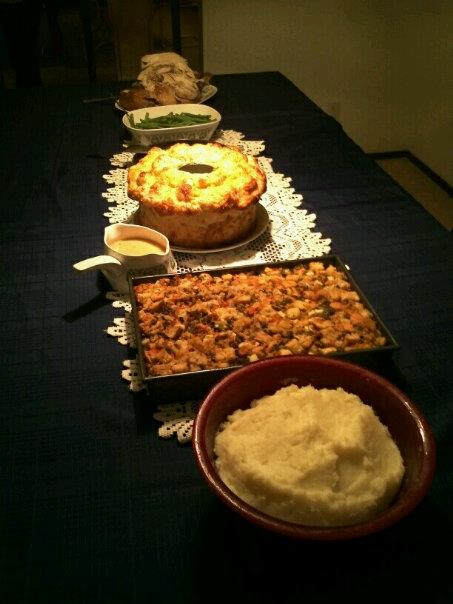 The first Thanksgiving meal cooked on my own after we moved–not quite the groaning table of my childhood, but tasty or so I was told. 🙂